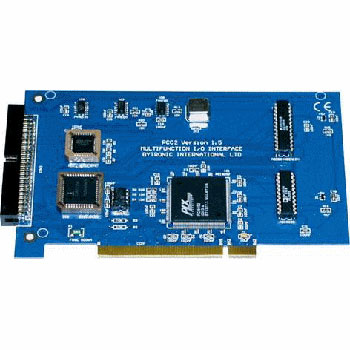 The PCC2 Internal Digital and Analogue Interface Card is PCI architecture compliant. PCI Cards are dynamically allocated at start-up, rather than being determined in hardware on the card.

The 8255 is a general purpose programmable peripheral interface (PPI). The device has twenty four I/O lines arranged as three ports A, B and C.

The 8255 has three main modes of operation, which may be applied to the I/O lines in two groups of twelve. On application of the power, or when the chip is reset, all lines are configured as inputs and must then be initialised to the user’s requirements.

The 8253 is a programmable counter/timer chip with three independent 16-bit Counter Timer Channels (CTCs). Multiple modes are available, programmed in software, and each CTC can be clocked at up to 5MHz. CTCs 0, 1 and 2 are functionally identical and each have two inputs, clock (CLK) and gate (GATE) and one output (OUT). The primary use of CTCs is to generate accurate control cycles that do not require software supervision, especially in non real-time operating system environments. These control cycles typically involve counting, accurate timing or generating output waveforms.

CTCs have a number of applications:

The DAC8228 is a dual 8-bit Digital to Analogue Converter generates two voltage outputs in the range 0-5v.

The ADC0848 is an 8-bit successive approximation Analogue to Digital Converter. The in-built eight channel multiplexer can be software configured for single ended, differential or pseudo-differential modes of operation. The maximum throughput time for an 8-bit conversion is 40µs (25khz).